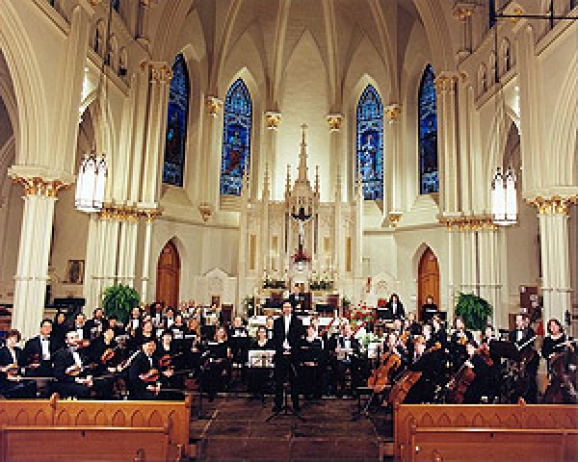 The Riverside Symphonia is a professional orchestra serving the Greater Delaware Valley including Bucks, Hunterdon, Mercer, and Somerset Counties for more than a quarter century. Created and supported by the Delaware River Valley community and its river towns, the Symphonia consistently presents concerts of the highest artistic level.

We delight in the intimacy of our performance venues. The venues we choose let the orchestra, the maestro, and guest artists from around the globe experience a special dose of excitement and a connection with the audience. We feel this is making music the way it’s meant to be.

"The setting was wonderfully appropriate. The finale…was everything one could want, a joyous sprint to an eminently satisfying musical finish-line." ˜ Bucks County Courier Times

The Symphonia premiered in 1990 and from the beginning has successfully provided first-class music at prices within the reach of all. Through the years, the orchestra has received critical acclaim from the press, our audiences, and our peers.

In 1996, Mariusz Smolij was appointed Music Director and Conductor of the Symphonia. Considered one of the most talented conductors of his generation. Smolij also serves as  Music Director of the Acadiana Symphony in Lafayette, Louisiana. He has served as Resident Conductor of the Houston Symphony and Assistant Conductor of the New Jersey Symphony. Since the 2002-2003 season, Maestro Smolij has been closely associated with the Wroclaw (Breslau) Philharmonic in Poland and has presided over the International Festival Wratislavia Cantans.

Each year, the Riverside Symphonia embarks on a delightful program of concerts that feature distinguished guest performers and conductors known throughout the world. This season is no exception and promises a truly notable combination of masterworks.

Music Director Mariusz Smolij received accolades for last year's series and under his baton, concert-goers, once again will enjoy unforgettable performances this season. Come join the Riverside Symphonia for a season that will uplift your spirit, enchant your mind and satisfy your heart.

"This professional orchestra has provided first-class music to its audiences… offering music-lovers a variety of unforgettable concerts." ˜ Nouveau