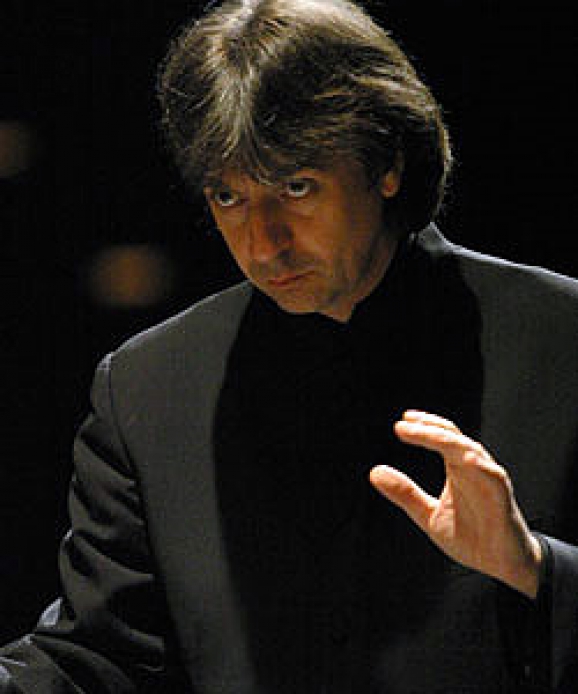 MARIUSZ SMOLIJ is considered one of the most exciting conductors of his generation. A frequent recording artist for Naxos International, he has been consistently gaining international critical acclaim, including praise from The New York Times for “compelling performances.” Maestro Smolij has led over 120 orchestras in 27 countries on five continents, appearing in some of the world’s most prestigious concert halls. In North America, he has conducted (among many others) the Houston Symphony, the New Jersey Symphony, the Orchestra of the Chicago Lyric Opera, the St. Louis Philharmonic, the Rochester Philharmonic, the Indianapolis Symphony, the Indianapolis Chamber Orchestra, the New Orleans Philharmonic, the Hartford Symphony and Symphony Nova Scotia. Internationally, he enjoys a notable reputation, appearing with important symphonic ensembles in Germany, Italy, France, Switzerland, Holland, Israel, China, South Africa, Bulgaria, Hungary, the Czech Republic, the Slovak Republic and Poland. His engagements have included collaborations with the Berner Symphony and Sinfonieorchester Basel in Switzerland (recording a CD and leading a series of concerts at the Tonhalle in Zürich with the latter), performances with Sinfonia Rotterdam, the Florence Chamber Orchestra, the Israel Symphony Orchestra, the Jerusalem Symphony, Orchestre Lamoureux in Paris, the Jena and Kiel Philharmonics in Germany, the Belgrade Philharmonic, the Budapest Symphony Orchestra, the Sofia Philharmonic, the Bogota (Colombia) Philharmonic, the Johannesburg Philharmonic in South Africa, and all the leading orchestras in his native Poland—including Sinfonia Varsovia, the Lutoslawski Philharmonic and the Warsaw National Philharmonic.

Maestro Smolij is currently in his fourteenth year as Music Director of the Acadiana Symphony Orchestra in Lafayette, Louisiana, and in his 20th season as Music Director of the Riverside Symphonia in New Jersey. Since 2016 he also serves as the Artistic Director of Toruń Symphony Orchestra in his native country of Poland. He is a former artistic director of the Lutoslawski Philharmonic in Wroclaw (Breslau), as well as the International Festival Wratislavia Cantans in Poland. His tenure with both American orchestras is marked by innovative programming, broad community appeal as well various creative collaborating projects, while significantly improving the high artistic level of the orchestras.

Maestro Smolij has been a permanent conductor with several acclaimed orchestras and musical institutions in the United States and Europe. Between 2000 and 2003, at the invitation of Maestro Christoph Eschenbach, he served as Resident Conductor of the Houston Symphony, where he led the orchestra in over one hundred concerts, presenting an impressively wide spectrum of orchestral repertoire. He was also assistant conductor of the New Jersey Symphony Orchestra, where he led the ensemble in over one hundred and twenty performances, receiving the highest accolades from critics and public alike.

Maestro Smolij served on the faculty of the School of Music at Northwestern University in Chicago-Evanston as a professor of conducting and director of the chamber orchestra from 1996 to 2000. At that time, he was the youngest full-time conducting faculty member among the top conservatories and universities in North America. Since 2011, he is a guest faculty and permanent guest conductor of the Tianjin Conservatory of Music in China.

In Europe, Maestro Smolij has been closely associated with one of Eastern Europe’s oldest and most renowned orchestras, the Wroclaw (Breslau) Philharmonic in Poland. He is credited with restructuring the orchestra’s operations and its artistic season, and with introducing innovative artistic concepts and new repertoire. He has not only conducted this orchestra in Poland, but successfully led it during foreign tours in Germany (Rheingau Music Festival), the Czech Republic (Janáček May Festival), France (opening concerts in Strasbourg for “The Year of Polish Culture”) and during its first historic tour of the United States (concerts in New York’s Lincoln Center and Philadelphia’s Kimmel Center, among others). Between 2002 and 2004 he presided over the International Festival Wratislavia Cantans.

In 2004 he appeared in the Concertgebouw in Amsterdam with the Rotterdam Chamber Orchestra; in 2002 he made his Paris conducting debut with the Orchestre des Concerts Lamoureux in the prestigious Salle Gaveau. In 2001 he made his highly acclaimed debut at New York’s Carnegie Hall with the Sinfonia Varsovia. His frequent collaboration with this premiere Polish orchestra includes concerts on three continents—Europe, North America and Asia—and a series of recording projects featuring masterworks of Polish and American symphonic music. His first CD for Universal —with music by Copland, Gershwin and Bernstein—was released in July 2002; his premier recording for Naxos International (with music by Andrzej Panufnik) was issued in November 2006.

As a champion of contemporary and deserving composers, Maestro Smolij has introduced many American audiences to several unknown works by Eastern European composers, and he regularly performs American orchestral music in Europe.  He led the Polish National Radio Orchestra in Krakow, Poland, in an all-American program which was broadcast to several Eastern European countries. He organized and conducted a special gala performance of American symphonic music in the Hall of the National Theater in Warsaw, Poland, that was recorded and broadcast by both Polish and American radio stations. The Hungaroton label issued his recording of music by American composer Bill Karlins. With the Wroclaw Philharmonic he has given the European and Polish premieres of works by American composers such as Barber, Copland, Thomas, Kernis, Rouse, Ellington and many others. As a very effective advocate and promoter of Polish music outside of his native country, Maestro Smolij frequently programs and performs works by Polish composers. In 1998, he organized the Polish Music Festival in Chicago, the single largest presentation of Polish music abroad in the last quarter of a century.

Maestro Smolij’s reputation as a conducting pedagogue and orchestra builder extends to both sides of the Atlantic. He is a faculty member of the International Workshops for Conductors in the Czech Republic, teaches at professional conducting seminars in the USA and Poland, and was invited to present conducting master classes at the Zürich Conservatory in Switzerland. Since 2011 he has been visiting professor at the Tianjin Conservatory of Music in China.

Born near Katowice, Poland, Maestro Smolij is an accomplished violinist. Founder of the internationally recognized Penderecki String Quartet, he performed and recorded with this ensemble in Poland, Germany, France, Italy and the United States. After studies in Europe he studied conducting in the United States, earning a doctoral degree from the Eastman School of Music.