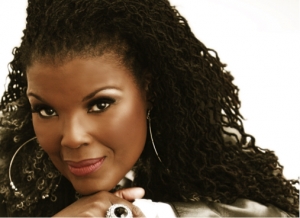 The Symphonia is thrilled to welcome Angela Brown back in her sassy and entertaining Opera from a Sistah’s Point of View.

While opera is the main catalyst for her career, Angela’s performance experience includes everything from star hostess on stage to producer and creator of Opera…from a Sistah’s Point of View, an inspired show that has gained international notoriety for bringing opera to the masses in the form of an edgy, yet educational, concert presentation.

Angela’s highly successful Metropolitan Opera debut in the title role of Aida captured instant attention from international print and broadcast media and catapulted her onto the world's prestigious opera and symphonic stages. Headlines from The New York Times read:  “At last an Aida,” and CBS Weekend News proclaimed: “the future of opera has arrived!” followed by features on the front page of The New York Times, on CNN, in Oprah Magazine, Essence Magazine, Ebony Magazine, Classical Singer, Reader’s Digest, and Psychology Today.

A career highpoint is her collaboration with the celebrated American composer Richard Danielpour. Her early success as Aida was immediately followed by world premier performances of Danielpour’s opera Margaret Garner in the role of Cilla with Opera Philadelphia, Cincinnati Opera and Michigan Opera Theater. The result was a triumph that led Mr. Danielpour to set the poetry of visionary Maya Angelou for Angela's voice in an orchestral song cycle, A Woman’s Life, co-commissioned by Pittsburgh Symphony and Philadelphia Orchestra, recorded in 2012 with the Nashville Symphony and released on the Naxos label in 2013.

This season includes more milestones for Angela. She co-stars in the new American opera, Charlie Parker’s Yardbird in the world-premiere performance with Opera Philadelphia and began a new collaboration with Richard Danielpour and the poetry of Maya Angelou in a work for orchestra and soprano to be premiered in 2015.