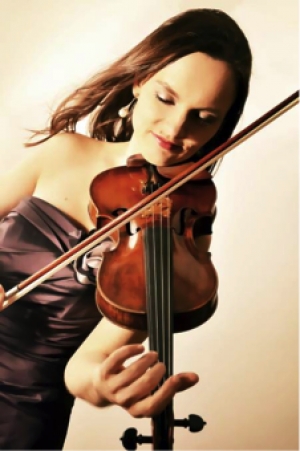 Award winning Polish-born and New York City-based concert violinist Kinga Augustyn has been described as “an adventurous performer valuable to the New York scene…her playing was riveting” (NY Concert in Review),  “A violinist for whom nothing seems too difficult…Kinga’s playing is a revelation” (Polish Daily News), “stylish and vibrant…playing with verve and superb control…great sensitivity and unashamed virtuosity” (The Strad Magazine), and “beyond amazing, “ (Fanfare Magazine). Her versatility in adapting to a wide range of music and styles is nothing short of magnificent. She has performed as a soloist with orchestras in the United States, Europe and Asia.  Among them are the Magdeburg Philharmonic, the Chamber Orchestra Leopldinum, the Wroclaw Philharmonic Orchestra, the American Academy of Conducting Orchestras at the Aspen Music Festival, the Manhattan Symphonie, The Gateway Classical Music Society Orchestra, the Broadway Bach Ensemble, the Glacier Symphony and the Augusta Symphony Orchestra.  As a soloist of the Manhattan Symphonie, Augustyn made her Asian debut in 2014 performing multiple concerts at China’s most prestigious concert venues such as Beijing’s Poly Theater and Shanghai Oriental Arts Center.

In addition to her many orchestra appearances, she has performed as a recitalist and chamber musician at Carnegie Hall, the Metropolitan Museum of Art, and Alice Tully Hall Lincoln Center among many others.  For those who remember the excitement of Lara St. John’s performances with the Symphonia, we think you will be equally impressed with the talent Ms. Augustyn bring to the stage.