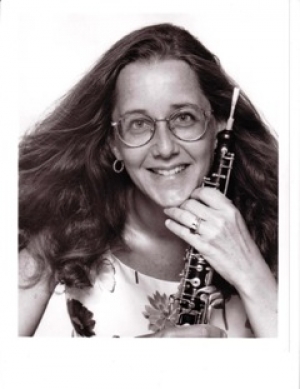 Lynne Cohen, Oboist, was educated at Juilliard Pre-College with the well-known pedagogue Lois Wann, and at Boston University with John Holmes of the Boston Symphony.  Ms. Cohen went on to hold positions in the Ft. Lauderdale Symphony, Greater Miami Opera, Palm Beach Opera and Ballet Orchestras.  She is a former faculty member of Florida International University and New World School of the Arts.

During a four-year sojourn in Europe, Ms. Cohen performed with the Collegium Academicum and the Orchestre de Chambre of Geneva and with the Hofer Sinfoniker in Hof, Germany.  She also taught at the Hindemith Institute in Blonay, Switzerland.

Ms. Cohen returned to Florida to play principal oboe in the Palm Beach Symphony and Opera, and with the Miami City Ballet Orchestra.  She joined the NY freelance musical scene in 1993 and has played in or subbed with most of the Tri-State area orchestras, including the New Jersey Symphony, New Philharmonic, Orchestra of St. Lukes, Westfield Symphony, Hartford Symphony, Stamford and New York Grand Operas, New York Virtuosi, Queens Symphony and Brooklyn Philharmonic.  She is a regular performer with the Bethlehem Bach Orchestra and is Principal Oboe of the Riverside Symphonia in Lambertville.

On Broadway, Ms. Cohen has held permanent positions in ten Broadway shows including Miss Saigon, Ragtime, Porgy and Bess, Baz Luhrmann’s La Boheme, Cinderella, and, currently, Les Miserables.  She can be heard on multiple cast albums and on recordings of Harry Connick, Kelli O’Hara, Jason Robert Brown, John Miller and the Gotham Winds, as well as on the NBC Live for TV broadcasts of The Sound of Music and Peter Pan.  Ms. Cohen teaches at Kean University and resides in Chatham with her husband, the conductor Constantine Kitsopoulos, where she maintains an active oboe studio.