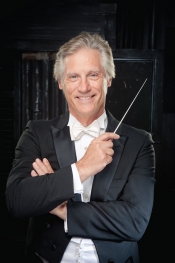 The 2007 Grand Prize Winner of the Varna (Bulgaria) International Conducting Competition, Wes Kenney is now in his 16th season as Music Director of the Fort Collins (Colorado) Symphony and Director of Orchestras at Colorado State University. Named in 2004 to an additional post as Music Director of Opera Fort Collins, he currently conducts four to five professional or collegiate operatic productions as well as numerous orchestra concerts and dance performances each season throughout Northern Colorado. He is also in his 6th season as Music Director of the Denver Young Artists Orchestra--the premier youth orchestra in the state of Colorado and the 2018 winner of the American Prize for performance. He will take that orchestra to Europe in June 2019.

Former positions include Associate Conductor of the Virginia Symphony, Music Director of the Oakland Youth Orchestra, and faculty conducting positions with the College of William and Mary as well as San Francisco State University.

Named Educator of the Year by the Colorado Chapter of the American String Teachers Association in 2008, Mr. Kenney has always sought out opportunities to work with talented young people. He has been a Guest Conductor with the Alabama, New Hampshire, New Mexico, and Virginia All-State Orchestras and served as Music Director of the Oakland Youth Orchestra for five seasons.

Mr. Kenney is a graduate of the University of Southern California and San Francisco State University and was awarded the prestigious Carmen Dragon Conducting Prize in 1992. Additional studies include a year at the Vienna Hochschule fur Musik, three years as a fellow at the Conductors Institute, several American Symphony Orchestra League and Conductors Guild Workshops, and the Sandpoint Festival. His teachers include Harold Farberman, Hans Beer, Gunther Schuller, Hans Swarovsky and Miltiardes Carides.